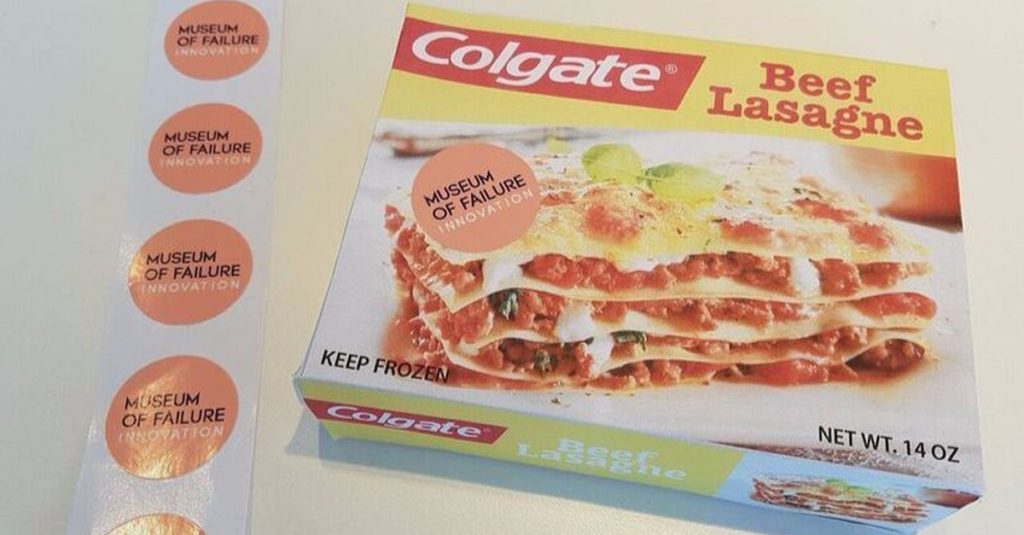 Failing to Succeed as a Leader Part 2

“One area where I think we are especially distinctive is failure. I believe we are the best place in the world to fail (we have plenty of practice!), and failure and invention are inseparable twins. To invent you have to experiment, and if you know in advance that it’s going to work, it’s not an experiment. Most large organizations embrace the idea of invention but are not willing to suffer the string of failed experiments necessary to get there.”
– Jeff Bezos, Letter to Shareholders, 2015 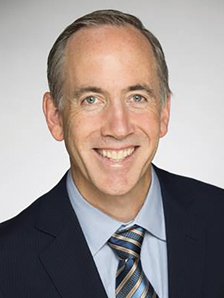 Jeff Bezos would love The Museum of Failure, located in Helsinborg, Sweden, and currently on an international tour. As the world’s largest collection of failed products and services from around the globe, it has been on my bucket list of places to visit since I read about its opening last summer. Its often laughter-inducing items include beef lasagna frozen TV dinner from Colgate (see picture above). Yes, the toothpaste brand tried to dish us some Italian food. Cook, eat, brush, repeat. Didn’t work too well. Another strong entry is Harley Davidson’s Hot Road eau de toilette. How about a little splash before your big date? A whiff of exhaust fumes to precede your entry into the room, perhaps?

Inclusion in the museum may be cause for corporate embarrassment, but it is far from a sign of disgrace. In fact, I would argue that companies should covet a spot in the museum for one of their failed products or services. Better, they might wish to create their own Failure Museum. Doing so would serve as a powerful cultural sign and reminder that the pathway to success is strewn with failures.

In this article, I extend the discussion to organizational culture, offering five additional ways leaders can “fail to succeed” in one of their most important roles, as shapers of culture. Of course, all organizations must succeed to survive. But for sustained excellence, they must balance accountability and the need for results with a bone-deep willingness and commitment to try, fail, and learn. Here are five practices and policies that can help achieve that balance by embracing smart failures:

Anatomy of a Failure

Post-mortems, after-action reviews, retrospectives—whatever the term used, the focus is the same—extracting learning from just-completed projects and initiatives. With workplace deadlines always looming, the pressure is strong on teams to hurl themselves into the next project. It takes a strong leader, and possibly a policy commitment, to ensure teams review project successes and failures before moving forward. Of course, the best reviews provide far more than a better understanding of our miscues. They also capture what worked well and lessons learned that can be applied to future projects and shared with others.

And why just look in the rear-view mirror for flubs? Nobel Prize winner Daniel Kahneman in his seminal book, Thinking Fast and Slow, advises that we go through a “pre-mortem” before we begin in a project or pursue our goals. Writes Kahneman, “Imagine that you are [X amount of time] into the future. You implemented your plan as it now exists. The outcome was a disaster. Take five to ten minutes to write a brief history of that disaster.” This mental exercise not only ensures our optimism for success is grounded in reality, but also helps us envision a variety of obstacles, missteps, and pitfalls on the journey that we might otherwise overlook. “The ability to learn is the most important quality a leader can have,” says Sheryl Sandberg. Leaders who insist their teams practice reflection-in-action are helping spread that capability to the broader company culture.

Performance management remains a bad word in many companies. A large number of organizations are dissatisfied with their process and are looking to overhaul them. Participative goal-setting, “always-on” feedback channels that provide frequent touchpoints, and an emphasis on coaching and development rather than evaluation are among the smarter revisions. The results include increased ownership, improved engagement, and a greater payoff in employee development and growth. A standard of more enlightened employee-led performance conversations is the opportunity to share successes one is most proud of achieving. But if leaders go a step further to ask for examples of where their direct reports did not meet with success, we might elicit even more powerful conversations. We would be able to explore together the individual’s willingness to take smart risks and to try new things. We would be able to assess their capacity to learn and their resilience in the face of setbacks and adversity. Above all, we would be communicating the expectation that striving to experiment, improve, innovate, and grow are principle orders of business. We can prompt rich discussions with simple questions like this: “What is something new you tried over the past performance period? (Or more provocatively, “What have you dared to try lately?”) What surprised you? What did you learn? What didn’t work so well and why? Have you learned any lessons you might apply in future work?”

It is a powerful sign when organizations not only forego finger-pointing or sweeping failures under the rug, but actually celebrate them. Elite advertising firm Hill Holliday in my hometown of Boston does just that with its annual Epic Fail Award. The $5,000 award is given to the team or individual who aimed high, pursued an ambitious plan with passion and drive, yet failed to reach their goal. As CEO Karen Kaplan, who instituted the award soon after her ascension to the top post, told The Boston Globe, “We’re asking [our employees] to create work that is so great and so different that people can’t help but notice it. Sometimes in striving for that, you’re going to fail greatly as well.” The practice was deliberately implemented to counter the agency’s tendency to be unforgiving of mistakes. Imagine the cultural ripples when the first two winners of the Epic Fail Award claimed the Jack Award, the company’s top performer honor, the following year. A friend at General Electric tells me it now has a similar award for notable busts, given to the person who “learned the most from trying something that didn’t work.”

With the job market heated up, companies can commit to hiring only the best, bringing aboard those who have proven themselves with strong successes in prior positions and companies. But what if, rather than dismissing those who had suffered serious setbacks or full-blown failures, we discovered instead that they possessed the daring, boldness, lessons, experience, knowledge and resilience to thrive in our companies? Amazon provides an instructive example. When the company hired the leadership team to run AmazonFresh, its new grocery delivery service, it made an unconventional choice. It selected the management team from Webvan, an online grocery delivery service from the first dot-com era that had been a colossal failure. Jeff Bezos and other decision makers at Amazon were convinced they had learned deep, invaluable lessons that would make them successes on a second go-around. This approach holds the promise of enhancing hiring practices at all levels. Smart hiring managers can ask questions like, “Tell me a time when you gave a great deal of effort to something that ultimately didn’t work. Why did it fail?,” “What did you learn from a business standpoint?,” and “What did you learn personally?” This addition to traditional hiring questions can turn up some true hidden gems for hire.

Obviously, company cultures that make greater room for failures are not throwing money at evident losers. They are making room for more trial and error, more experimentation, and more learning. As Jeff Bezos said further in his 2015 shareholder letter, “Outsized returns often come from betting against conventional wisdom, and conventional wisdom is usually right. Given a ten percent chance of a 100 times payoff, you should take that bet every time. But you’re still going to be wrong nine times out of ten.”

Noted leadership guru Rosabeth Moss Kanter long ago encouraged taking an “Innovation Portfolio Approach,” whereby a company makes many small, lower risk bets at the base of the pyramid, a handful of mid-sized bets in the middle of the pyramid, and one or a very few big bets at the pyramid’s pinnacle. Design thinkers will recognize this “many bets” approach as a “fail fast” strategy of rapid experimentation and iteration.

In addition to culture-shaping formal processes, top leaders should never forget that their words and actions shape company culture in powerful ways. Take Mike Hoover, CEO of Sundt Construction, a 100-percent employee-owned business headquartered in Tucson, Arizona, and among the most respected general contractors in the United States. Recently, Mike was asked to share his wisdom at a leadership program MDA Leadership conducted for Sundt’s high potential talent. His three-part leadership mantra: “I may not be right. I may not have all the answers. I may be part of the problem.” What a convincing, culture-shaping lesson he imparted in a humble, vulnerable way. You can bet those employees will share important feedback he needs to hear.

I began with a quotation from Jeff Bezos. Let’s let him have the last word as well. The tolerance for failure is deeply ingrained in Amazon’s culture. It’s a point Bezos has made every year since his very first Amazon shareholder letter in 1997. He and insiders at Amazon know full well what the public does not realize. The public perception is of a winning company that continues to make the right bets and achieve massive success. In fact, Amazon has shut down countless failed projects over the past two decades and has much to contribute to The Museum of Failure. Entries might include its auction site, Amazon Auctions; its hotel booking site, Amazon Destinations; and the massive failure of its first phone, Fire Phone, which cost the organization hundreds of millions of dollars. Rather than hide from mistakes, miscues, and missteps, Amazon is dedicated to making many bets, trying many things, failing at some, learning quickly from them, and trying again. Of the big phone flop, Bezos has said, “If you think that’s a big failure, we’re working on much bigger failures right now. And I am not kidding. And some of them are going to make the Fire Phone look like a tiny little blip.”

Jim Laughlin serves as Vice President of Consulting, Northeast Region for MDA Leadership Consulting and is based in the Boston area. For more than 20 years, Jim has designed and implemented learning and leadership development systems for companies worldwide. He is also a sought-after executive coach with expertise in organizational communications, change and transitions. More About Jim / LinkedIn